Installing the Memory, SSD and a WiFi Card in the NUC

I planned to do this article already a long time ago, but better late than never. Anyway, I’ll show you how simple it is to install the memory, an mSATA SSD disk and a WiFi adapter in the Intel NUC. My NUC is the Haswell Core i3 model without space for a 2.5 inch drive, so I will not be showing how the 2.5″ drive is installed. Other than that, the installation is more or less the same regardless of the NUC model. Some models have only 1 slot for memory or no space for an mSATA drive, so this could be a bit different.

The instructions that come with the NUC are clear, but maybe you’re just thinking about buying a NUC still or have misplaced the instructions. The installation takes 5-10 minutes and is really straightforward. However, use caution to not break anything when the box is open and do disconnect the power from the NUC before opening it.

My hardware is following:

If you are interested of building a NUC for yourself, have a look at the NUC configurator!

To install the hardware you will need a screwdriver. Ideally 2 screwdrivers, but you can manage with one only. With the bigger one you will open the box and with the smaller one you will unfasten and fasten the screws that hold the Mini PCIe cards in place. I’m using Wera screwdrivers (Buy from Amazon) as it does not get better than that. Those of you who have used one, know what I’m talking about.

Start by unfastening the 4 screws inside the rubber feet of the NUC. One in each corner. Now you can pull the cover off. You might need to use your finger nails a knife or some other tool to carefully pull the cover a bit off.

Now use the smaller screwdriver to unfasten the screw that is marked with a red arrow in the picture above.

Insert the WiFi card into the slot in a slight angle as shown in the picture above.

Hold down the card with your finger and replace the screw you took off a couple of steps earlier. The screw will hold the WiFi card in its place.

The  NUC chassis is shipped with WiFi antennas preinstalled. These need to be connected to the WiFi card that we just installed in its slot. Pull back the transparent plastic covers from the antennas…

… and connect the antennas into the small connectors on the WiFi card. The connectors are really small so this might be a little bit tricky. If you’ve got big fingers you might want to use tweezers or a small-fingered relative for this phase.

After the antennas are connected, the WiFi adapter is ready to be used. 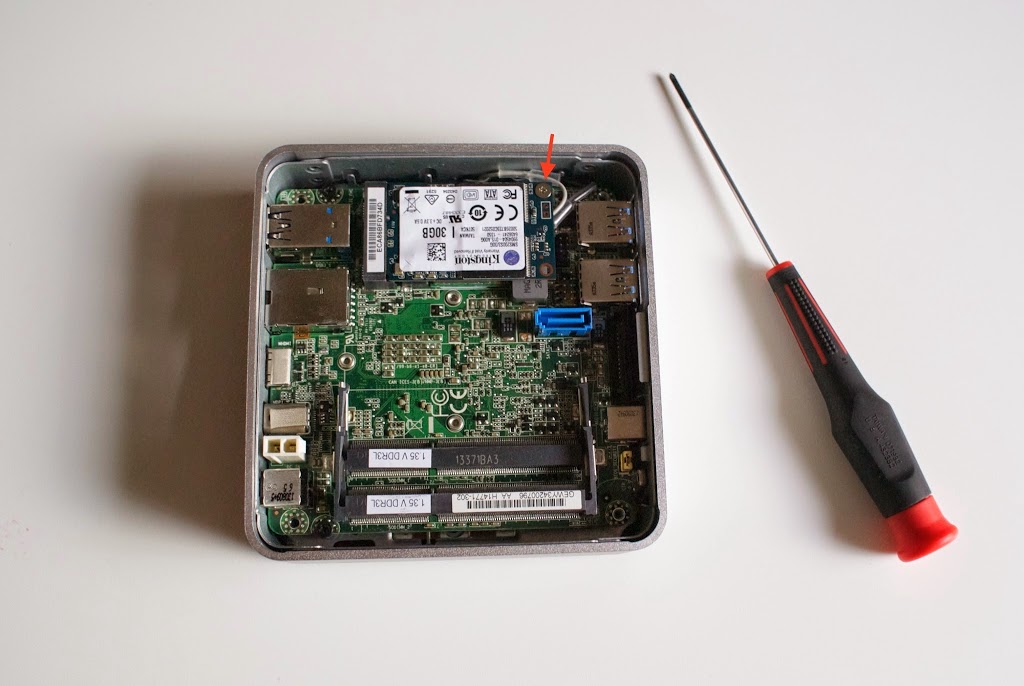 Next step is the mSATA disk. After the previous phase this is really easy. Just unfasten the screw that is highlighted with a red arrow in the picture above, insert the mSATA card into the Mini PCIe slot in the same way you did with the WiFi adapter and replace the screw. You’re done.

I’m going to add two memory modules here. One is enough, but by adding two similar modules the dual channel is enabled. RAM in dual channel mode is marginally faster than single channel. Some NUC models only have a slot for a single memory module.

Start by inserting the module at an angle in to the lower memory slot as shown in the picture above. Then push down the module as indicated by the red arrow until the memory module is securely in its place. You will hear and feel a click when the module is correctly seated.

In the picture above you can see a single memory module installed in the NUC. If you have a second module, install it in the same way you did install the first one. 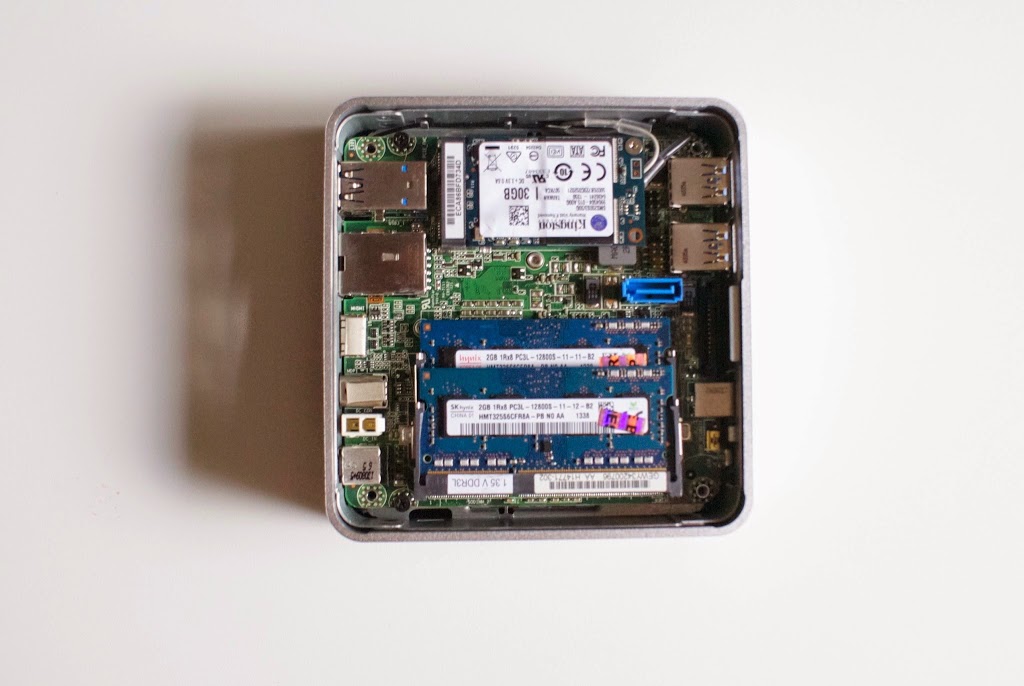 Now you have two DDR3L SODIMM memory modules, the mSATA drive and the WiFi adapter installed and ready to be used.

Now replace the cover. Make sure you put it back in a correct orientation. One easy way to see that is to look at the thermal pad marked with a red arrow in the picture above. That should come against your mSATA drive.

Fasten the four screws and you’re done! Plug in the power and take your new NUC for a ride.