In the second part of our review, we’re installing Windows on the NUC and running a few benchmarks to compare the performance with the NUC5i5RYK/NUC5i5RYH models. If you came via a search engine and did not read part 1 of the review, I’d suggest having a look at that first.

Installation of Windows 10 on the NUC was a breeze. Windows update automatically installed the drivers, though I noticed they were not the absolutely latest ones that were available on Intel Download Center pages. I guess it takes a little while before the latest drivers get rolled into Windows Update. Specifically I downloaded the latest graphics driver version 15.40.10.4300 for the graphics benchmarks.

Note that if you’re trying to install Windows 7 on the NUC, you will need to use the USB 3.0 ports for your media. However, Windows 7 installation does not support USB 3.0, so you will need to force the USB ports into USB 2.0 mode in the BIOS. This you can do by disabling the XHCI mode.

The benchmarks were driven with 4 gigabytes of DDR3L-1600 memory in dual-channel mode. The exact same memory was used for the NUC5i5RYK benchmarks.

Cinebench runs 3 separate benchmarks and gives us figures that are comparable. First a simple 3D car chase that measures mainly the GPU performance. The result is in frames per second. Second there’s a rendering of 3D model with all cores. This stresses purely the CPU. Finally there’s another rendering of the same model, this time using just a single CPU core.

3DMark does several game-like benchmarks that test mainly the performance of the graphics adapter in a PC although the CPU has an impact as well.

The results below repeat what we’ve seen already. The i7 NUC pulls ahead of the i5, but not by that much. In general, the performance is not on that kind of levels that you could expect modern games to run on a satisfactory level. Some older games, such as Diablo 3, are playable, but you’ll need to turn down the details to low. 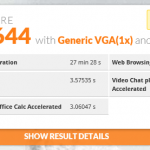 Compared to the previous NUCs that I have tried out I was surprised by the amount of noise that the fan in this NUC makes. When idle or under moderate stress the fan was running at around 3000 rpm and was very nice and quiet – not disturbing at all. When all cores of the CPU were stressed the temperature and the fan speed started rising until the temperature stabilized a bit below 90 degrees Celsius. At the same time the fan would be running at 6200 rpm and you could really hear that!

Furthermore, a strange thing that I observed was that when only the CPU was stressed the fan speed rose in a predictable way bit by bit, but whenever I ran something more GPU-intensive the fan kicked in immediately from 3000 to 6200 rpm in a second. This often happened almost at the same moment when the first 3D scenes were drawn on the screen – sometimes even immediately when the introduction of the game started. You can see that on the bottom right corner of the graph below.

It’s good to realize that the TDP for the Core i7 CPU used is 28 watts, whereas the other Broadwell NUCs put out 15 watts. Naturally this means more heat and higher fan speeds. The fan is a small unit, so the noise is quite high pitched noise – similar to many laptops.

The NUC5i7RYH leaves me with mixed feelings. It is naturally the fastest sub-liter PC I’ve ever used, but on the other hand is that enough? Quite frankly the performance of the i7 NUC is not enough for anything more than occasional gaming. The NUC will manage your average desktop applications and even some heavier tasks like image or video editing with relative ease, but the thing is, the cheaper and more quiet Core i5 model will handle the same applications so well that most of the people will not notice the difference.

For example, the Core i7 model will not be any better than the i5 as a HTPC. Neither of the models are able to decode 4k HEVC encoded video and both of them will handle any full HD content with ease as well as H.264 encoded 4k content. There’s absolutely no value in the extra horse power in this use case. In the worst case the louder fan in the NUC5i7RYH will ruin your movie night, although I saw the processor level to stay at such a low level that the fan did not kick in yet. In other words, I’m wondering about the use case for this NUC.

If you want the absolute fastest NUC money can buy, be sure to equip it with DDR3L-1866 RAM and a fast SSD drive – that way the system will be a bit faster than the results I was showing above. NUC Guru can give you some suggestions on compatible memory modules and SSD drives.