A couple of weeks ago I reviewed the Skylake i3 NUC that hit the shelves around Christmas. Today it is time to look at the big brother of that model, the Core i5-powered NUC6i5SYH. We found out that the i3 model was performance-wise a surprisingly large upgrade over the previous generation model, so we had high hopes that its i5-powered sibling would surprise us equally positively. Do note that the other Skylake i5 NUC, NUC6i5SYK, is the model that has a more sleek chassis but no space for a 2.5″ drive. Otherwise the units are the same – same mainboard, same CPU, same performance.

From outside the Skylake i5 NUC is identical to the i3 model. It’s also very similar to the previous generation Broadwell NUCs. Each unit has the already-familiar glossy black plastic top cover (that inevitably gets scratched – keep the plastic film on it until you’ve finished installing the components) and an aluminium chassis. Dimensions haven’t changed either: 115 x 111 x 48 mm or 4.5″ x 4.4″ x 1.9″. The NUC6i5SYK model would be slightly smaller: 115 x 111 x 32 mm or 4.5″ x 4.4″ x 1.3″.

On the front of the NUC we now have a blue front panel power LED between the IR receiver window and the 3.5mm audio jack. When the NUC is sleeping, this LED will be blinking in orange color. You also have two USB 3.0 ports, out of which the yellow one is fast charging capable.

Behind the NUC we find the usual connectors with again one small change: the HDMI 1.4b port is now a full-sized port instead of the mini HDMI port found in the previous generations. The rest of the ports are the same: 19-volt DC input, RJ-45 for Gigabit Ethernet, two USB 3.0 ports and a Mini DisplayPort 1.2.

If you’re interested in the unboxing, have a look at the YouTube video below. It’s been created for the NUC6i3SYH, but the NUC6i5SYH unboxing would be totally identical – the contents of the box are the same.

The Skylake NUC is delivered without memory and storage media included. For memory you should choose either 4, 8 or 16 gigabyte memory modules, although at the time of writing this article 16GB modules were next to impossible to find. There are two slots available and even if you can populate only one of them, you should definitely consider installing two similar memory modules for optimal performance. The memory module must be a 1.2 volt DDR4 SO-DIMM module, and if this one is anything like its predecessors it can be a bit picky regarding the compatible memory modules. For this review I used the Kingston HyperX HX421S13IBK2/8 which is a 2-module kit with total capacity of 8 GB. If you want to be sure that you get the right kind of memory module go see the NUC Guru – our resident guru who can suggest you hardware that definitely works together. 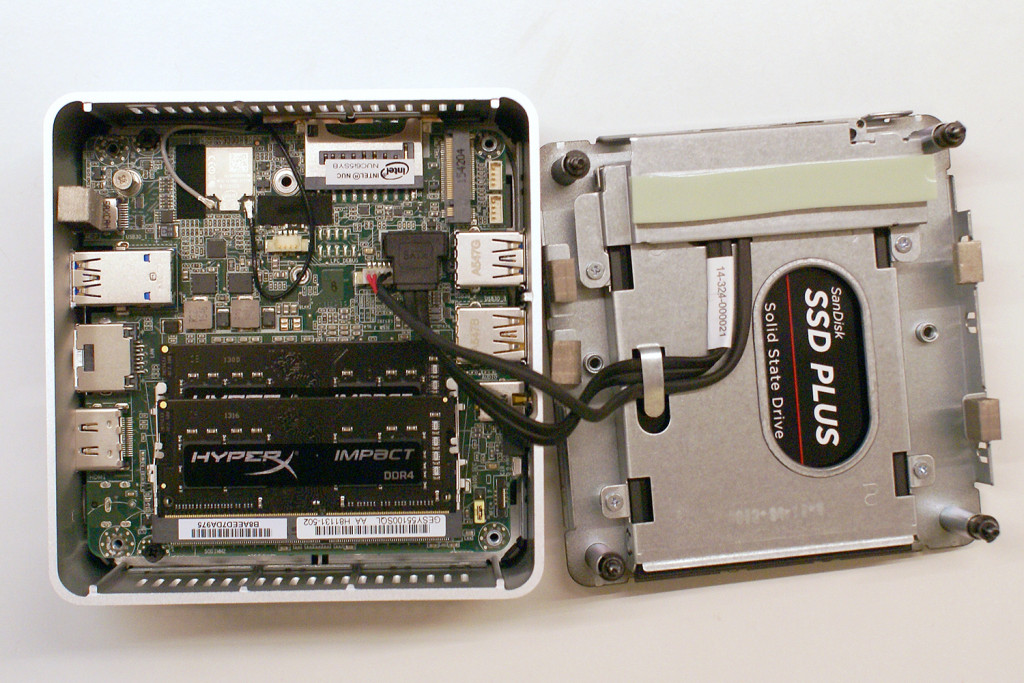 Skylake i5 NUC with components installed

After removing the four screws that secure the bottom cover to the chassis, you can immediately access the mainboard. The NUC6i5SYB mainboard is used for both NUC6i5SYH and NUC6i5SYK models. The difference is that NUC6i5SYH has a slot for a 2.5″ drive in the bottom cover and the SATA cables that connect to the mainboard. NUC6i5SYK has the SATA connectors on the mainboard, but does not come with any of the cabling supplied. For this review I installed a cheap Sandisk 128GB SSD drive in the 2.5″ slot.

It’s really quite impressive how much Intel has managed to pack on this tiny motherboard. You’ve got two DDR4 memory slots dominating the bottom of the above picture. Skylake is the first NUC to use DDR4 memory, so you cannot simply upgrade from previous generations and move your memory to this NUC.

At the top you can see the M.2 slot. It supports PCI Express 3.0 specification and up to x4 bandwidth. When using a fast PCIe-based SSD drive the maximum bandwidth is limited to about 1600 megabytes per second according to Intel. You can also use a cheaper, standard M.2 SATA SSD drive in which case the maximum bandwidth is about 540 MB/s. The M.2 card used should be either 22×42 or 22×80 in size. 22×60 cards are not supported. As you can see, a 22×80 card will be physically above the SD card reader and the WiFi adapter – there’s no space for a mounting screw for 22×60 cards. Possibly you could use a 22×60 card with a 3rd party adapter. The 802.11ac WiFi adapter is soldered to the mainboard and not replaceable. 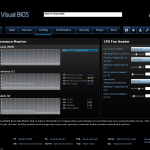 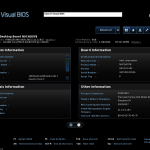 The device runs Intel’s usual Visual BIOS. It’s not the nicest or most flashy, but does its job. As usual, I reduced the minimum fan speed a bit to 25% in order to make the NUC a bit more quiet. While it’s not noisy out-of-the-box by any means, making this change turns it almost silent. BIOS version 28 was preinstalled in the NUC and as that is the latest that’s what was used for this review.

I wrote an article on how to prepare the Windows 7 installation for USB 3.0 support, but you can nowadays also use Intel’s Windows 7 USB 3.0 Image Creator tool, which basically does automatically all the steps I described in that article.

When you finally have Windows 7 up and running you will not have any network connectivity. What you need to do is to download the WiFi/LAN drivers on another PC and move them to your NUC (on a USB stick for example) and install. When you get network connectivity, you should spend a few hours downloading the latest Windows patches. In the end when all is said and done, you’ve got a working Windows 7 system and everything runs smoothly.

These days I use Windows 10 instead of Windows 7, so that’s what I tried to install next. I used Windows 10 November 2015 image, also known as version 1511, and installation itself was uneventful and as expected. However when the system was up and running a driver from Intel’s download center was needed for both the WiFi and Ethernet adapters before the system was fully usable. When the networking was up and running Windows automatically installed the necessary drivers for rest of the NUCs components. However, the display driver was slightly outdated version, so I replaced the driver with a newer one from Intel’s support website.

The next parts of the review: