True to their release cycle, once again Intel has delivered a new Core i3 NUC few days before the end of the year. The 2016 Core i3 and Core i5 NUCs are powered by the new Skylake processors. In our Skylake NUC review we have a look at the current Core i3 NUC that also carries a code name NUC6i3SYH (NUC with 6th generation Core i3 process in a High case that has space for a 2.5″ drive). NUC6i3SYK is the sister model of this NUC: the only difference is that the model we review is slightly higher and has a slot for a 2.5″ drive, whereas the NUC6i3SYK is 15 mm (5/8″) thinner and does not have that slot.

Walk around the NUC 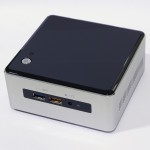 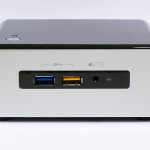 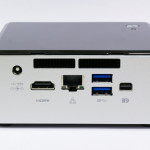 In the looks department nothing much has changed when looking at the previous generation. Each unit has the already-familiar glossy black plastic top cover (that inevitably gets scratched – keep the plastic film on it until you’ve finished installing the components) and an aluminium chassis. Dimensions are also pretty much the same: 115 x 111 x 48 mm or 4.5″ x 4.4″ x 1.9″.

On the front of the NUC we have only a small change when looking at the previous generation: there’s a blue front panel power LED between the IR receiver window and the 3.5mm audio jack. You still have the two USB 3.0 ports, out of which the yellow one is fast charging capable.

Behind the NUC we find the usual connectors with again one small change: the HDMI 1.4b port is now a full-sized port instead of the mini HDMI port found in the previous generations. The rest of the ports are the same: 19-volt DC input, RJ-45 for Gigabit Ethernet, two USB 3.0 ports and a Mini DisplayPort 1.2. We would have liked to see a HDMI 2.0 port here for full support of current 4K televisions. HDMI 1.4b allows 4K only at 30 frames per second or less – which of course is ok for most of the things right now, but things will change in the future.

The Skylake NUC is delivered without memory and storage media included. For memory you should choose either 4, 8 or 16 gigabyte memory modules, although at the time of writing this article 16GB modules were next to impossible to find. There are two slots available and even if you can populate only one of them, you should definitely consider installing two similar memory modules for optimal performance. The memory module must be a 1.2 volt DDR4 SO-DIMM module, and if this one is anything like its predecessors it can be a bit picky regarding the compatible memory modules. For this review I used the Kingston HyperX HX421S13IB/4. If you want to be sure that you get the right kind of memory module go see the NUC Guru – our resident guru who can suggest you hardware that definitely works together. 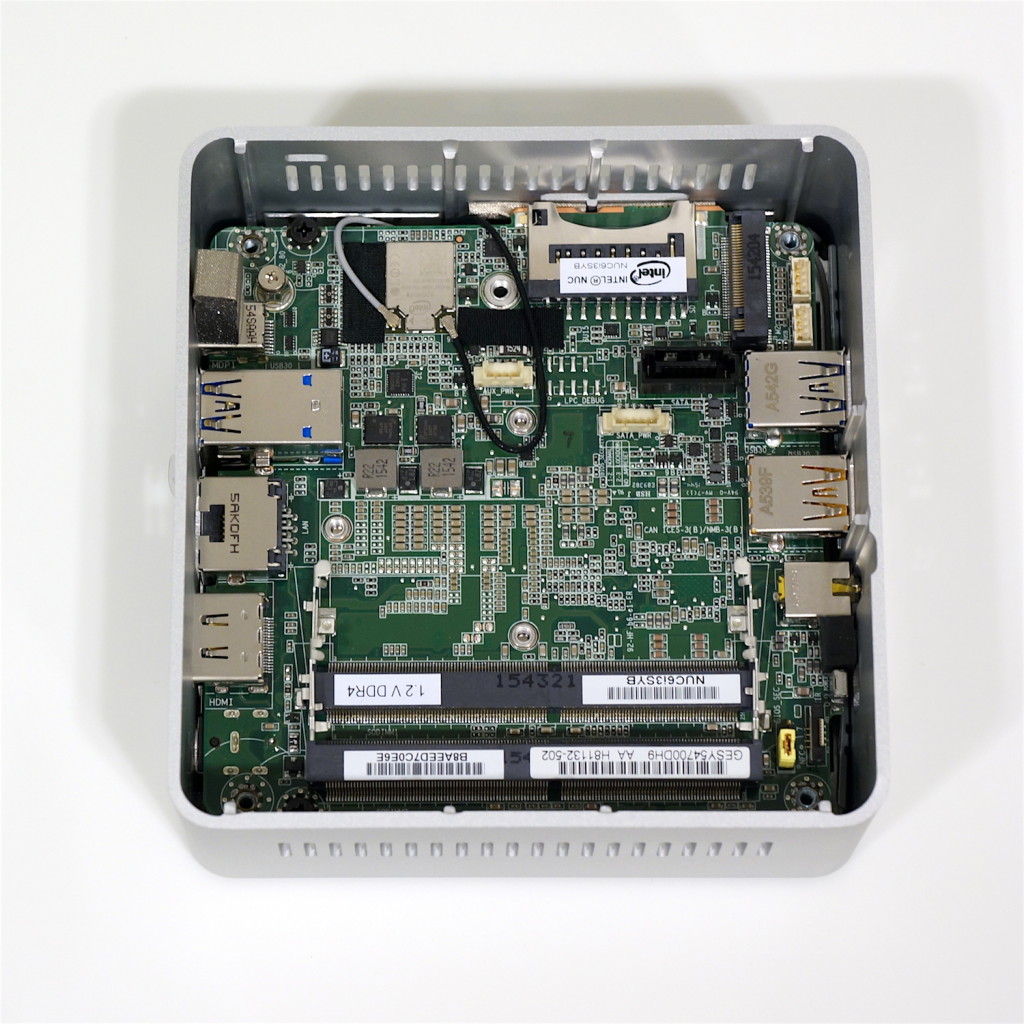 At the top you can see the M.2 slot. It supports PCI Express 3.0 specification and up to x4 bandwidth. This means that when using a fast PCIe-based SSD drive the maximum bandwidth is about 1600 megabytes per second. You can also use a cheaper, standard M.2 SATA SSD drive in which case the maximum bandwidth is about 540 MB/s. The M.2 card used should be either 22×42 or 22×80 in size. 22×60 cards are not supported. As you can see, a 22×80 card will be physically above the SD card reader and the WiFi adapter – there’s no space for a mounting screw for 22×60 cards. Possibly you could use a 22×60 card with a 3rd party adapter. The 802.11ac WiFi adapter is soldered to the mainboard and not replaceable.

Normally you don’t need to take out the mainboard from the chassis, but for the purposes of this review, I did so. 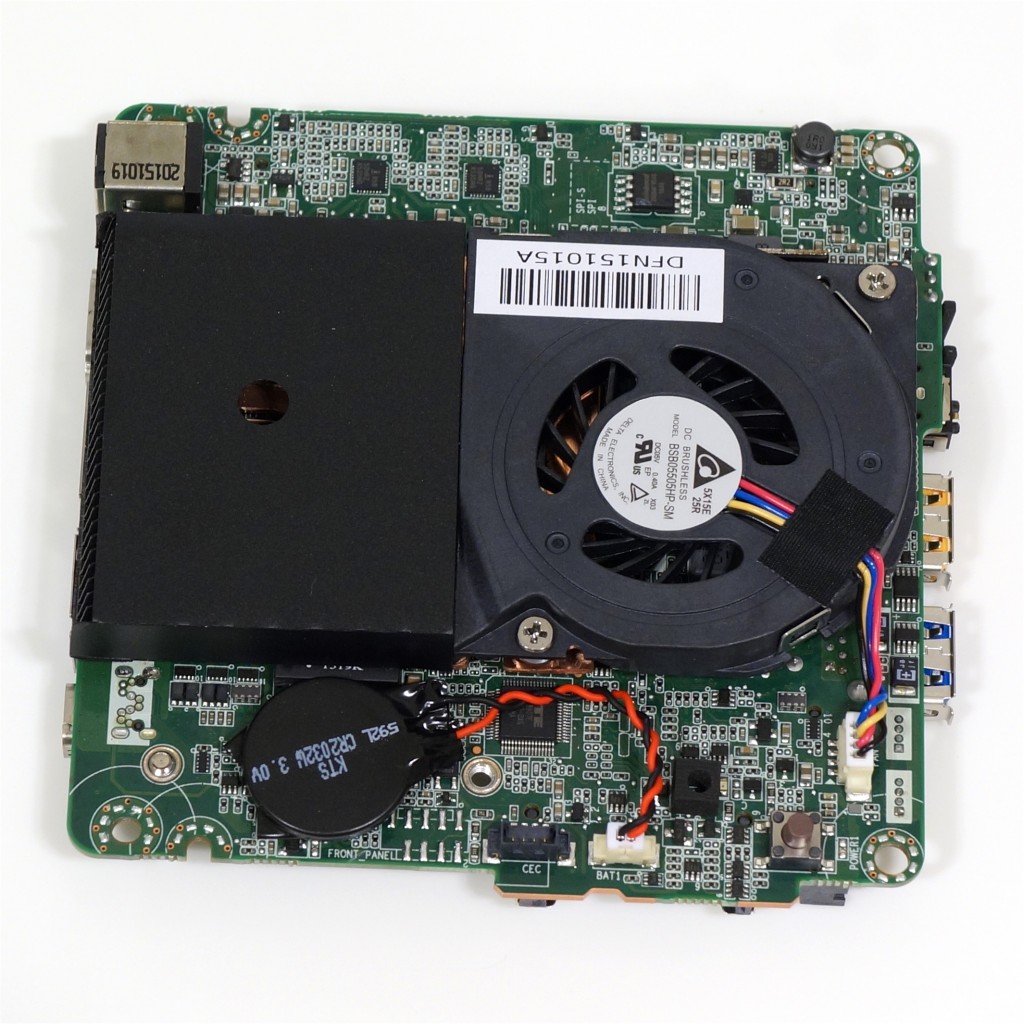 The heat sink assembly looks very similar to the one used in Broadwell. What is noteworthy here is that Intel has included a 4-pin connector for HDMI-CEC. This should make it easier for companies such as Pulse-Eight to create a complete HDMI-CEC adapter for the NUC. Intel has not been too consistent when it comes to the CEC connectivity in the NUCs in the past. We can only hope that this connector is here to stay.

I also removed the heat sink assembly to see the CPU. It seems they’ve used grey thermal paste this time instead of a thermal pad used in some previous generation NUCs. 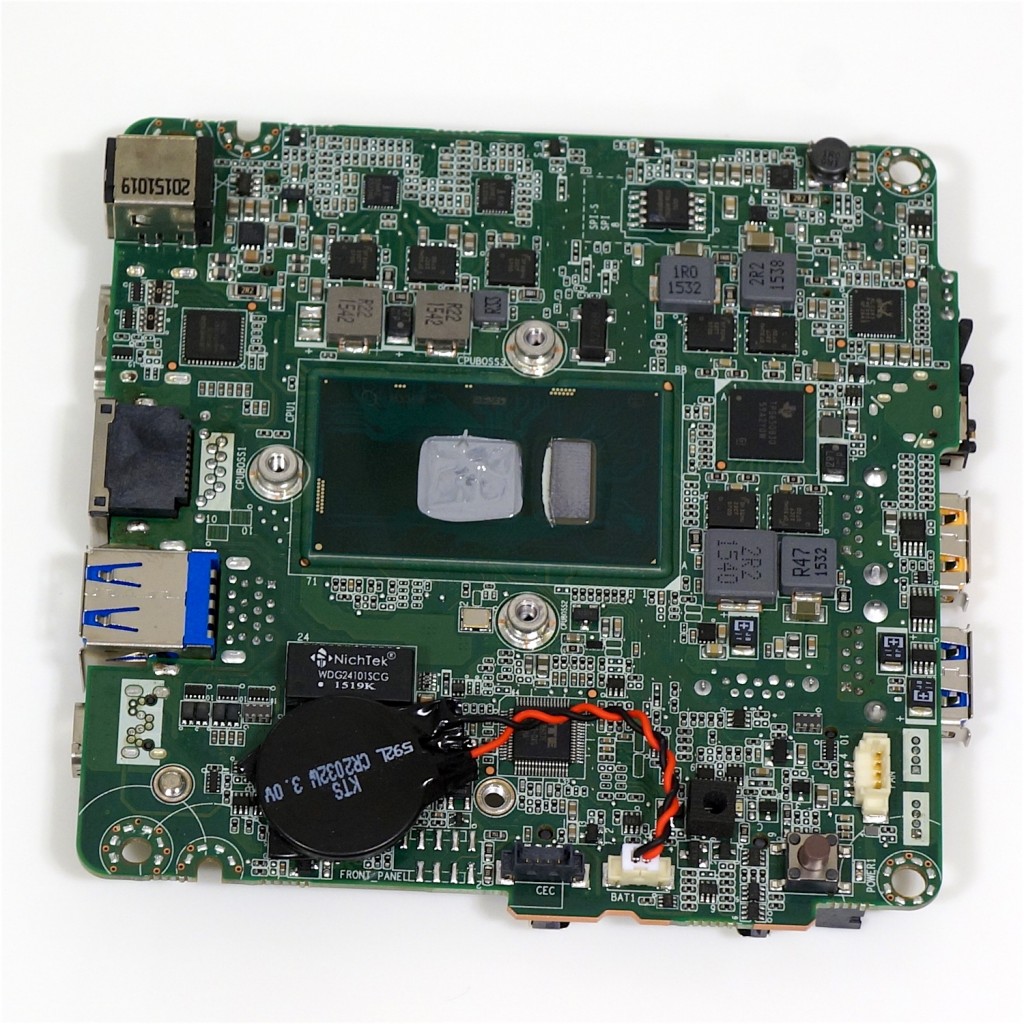 The device runs Intel’s usual Visual BIOS. It’s not the nicest or most flashy, but does its job. As usual, I reduced the minimum fan speed a bit to 25% in order to make the NUC a bit more quiet. While it’s not noisy by default, making this change turns it almost silent. BIOS version 28 was used for this review. 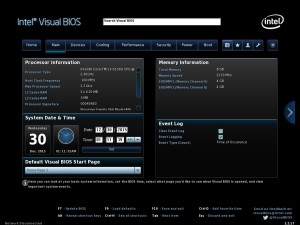 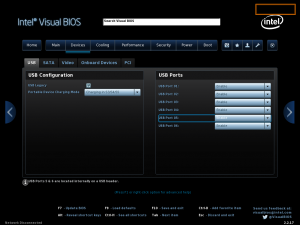 Next Parts of the Review