In the second part of our Skylake i7 NUC review we run some popular benchmarks on it to get an idea how does it perform compared to the other Skylake NUCs and the previous generation i7 NUC. If you came here via a search engine, I’d suggest you take a look at the first part of the review first. We’re going to run our standard setup which is 3DMark, Cinebench and PCMark plus some extras this time.

3DMark is a popular benchmarking suite that benchmarks video and gaming performance of the computer. See below for the results and a comparison to the previous i7 NUC and the other Skylake NUCs:

As you can see, the i7 NUC gets 45-65% better results when compared to the Skylake i5 NUC and is pretty much twice as fast as the previous generation i7 NUC!

Cinebench runs 3 separate benchmarks and gives us figures that are comparable. First a simple 3D car chase that measures mainly the GPU (OpenGL) performance. The result is in frames per second. Second there’s a rendering of 3D model with all cores. This stresses purely the CPU. Finally there’s another rendering of the same model, this time using just a single CPU core.

PCMark 8 is a benchmarking utility to test the performance of the computer in typical office and creativity-related tasks. Below you can see the results of my benchmarking. As you can see, when we leave the GPU-intensive gaming zone, the differences are more subtle. The raw CPU power of the Skull Canyon NUC guarantees the pole position in each of the tests, but the differences are not that big as they were on the previous benchmarks.

I’ve never run Geekbench before, but a reader requested Geekbench results earlier so here they are. Below you can find the 64-bit Geekbench score for NUC6i7KYK. 14028 for multi-core and 3744 for single-core tests. If you’re interested, you can read the full detailed results here.

Previously, the disk performance has been locked at 1600 MB/s level. This was the case with the Broadwell i7 NUC and this was the case with the Skylake i3 and i5 NUCs. However, a BIOS update supposedly fixes this for Skylake NUCs in the nearby future (there’s a beta BIOS already). For some reason, I get “only” 680 megs of write speed, but I have not yet explored the reason. It’s the first time I use this drive, so I don’t know if it’s due to the drive or the NUC. Read speeds are in the healthy 2 gigs per second range. 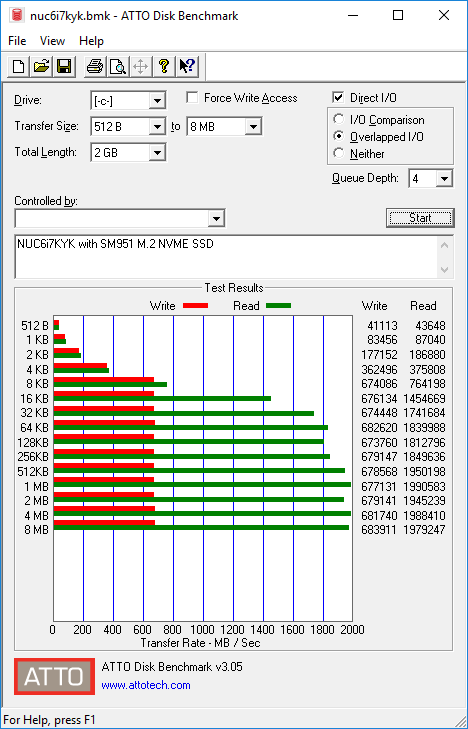 After seeing the strange fan behaviour of the Broadwell i7 NUC and considering the fact that the Skull Canyon NUC has a 45-watt CPU in a 0.68 liter case, it seems that fan noise is the question on everyone’s mind. Evaluating fan noise is difficult, as noise is such a subjective topic. I’ll try though. When the CPU is close to idling (ie. when you’re browsing internet, writing documents and doing typical productivity related tasks) the unit is pretty quiet. You can hear the fan, but it’s not annoying. Quite close to the other Skylake NUCs I would say. When you put more stress on the CPU, the fan speed gradually ramps up and it starts to get more noisy. It does not get NUC5i7RYH noisy, but it gets around to the same level as some laptops when under full stress. The CPU gets close to 100 degrees celsius – that’s pretty hot!

If you’ll be gaming with your Skull Canyon NUC or doing constantly some other CPU-intensive tasks, you’ll be hearing the fan. It’s a small unit and it’s a CPU that puts out 40+ watts. There’s no escaping that. It’ll be interesting to see if third parties do come up with fanless or more quiet cases for this NUC.

The NUC6i7KYK supports officially DDR4 SODIMMs in 2133 MHz variety. However, even Intel said that the unit supports 2133+ MHz DDR4 RAM. I tested the following 3 RAM modules in a dual-channel configuration and ran some benchmarks to see if it really makes a difference which RAM you choose.

I made sure that the memory was detected according to the speed and that I saw in Windows also that the memory speed was as expected. Based on the results, I’d say it really does not matter that much which RAM you choose. I’d say go for the DDR4-2400 CL14 RAM as that seems to be as cheap as the 2133 MHz RAM (and you can always run that in 2133 MHz mode if you like).

Other parts of the review: