In the concluding part of the Kaby Lake NUC review we install Ubuntu Linux on it and try how it works as a HTPC. If you came here via a search engine, be sure to visit the other parts of this review as well.

I downloaded Ubuntu Linux 16.10 Desktop (Ubuntu 16.04.1 LTS does not have a new enough kernel for supporting the WiFi adapter) and set to install it from a USB stick for quick test how does it work with the NUC. The installation was uneventful and the system booted up just fine. 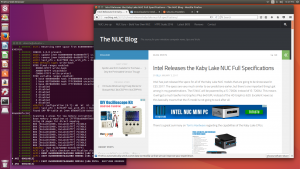 The WiFi and Bluetooth adapters were working fine, there were no issues with the GPU and in general things seemed to be fully functional. If you’re interested, the kernel log from a boot can be found here. Ubuntu 16.10 has kernel 4.8, which is quite fresh. I would not suggest anything much older than that as the Kaby Lake GPU and the WiFi adapter are not properly supported in older kernels…

The Kaby Lake NUC should make a nice HTPC due to a couple of reasons. Lively performance, small size and quietness are just a few of them. In addition it has a HDMI 2.0 interface (needed for 4k at 60 Hz) and it features full hardware decoding of H.264 and HEVC video even at 4k resolutions @60 Hz refresh rate. Even 10-bit HEVC video decoding is supported by the hardware. VP9 hardware decoding is also included with both 8 and 10-bit content support.

The Kaby Lake SoC does not support HDMI 2.0 natively, but instead Intel has added a LSPCon that will convert the DisplayPort signal to HDMI 2.0. According to the spec sheet for the MegaChips LSPCon that is used in this NUC the chip should also be able to support High Dynamic Range (HDR). Unfortunately I don’t have a 4k HDR television that I could use to test this now..

The NUC7i3BNH supports HEVC 10-bit decoding even at 4k resolutions. This is a big plus as 10-bit HEVC content seems to get more and more common. It’s worth noting that that is the format chosen for the 4k Bluray as well. Kodi 17 and MPC-HC were able to play 10-bit HEVC videos at ease. The CPU usage stayed at very low levels as the video gets decoded by the GPU.

The previous NUC that I reviewed (NUC6CAYH) had some issues with the HD audio pass-through. I was keen to see whether or nor this NUC would pass through Dolby TrueHD and DTS-HD audio to my amplifier.

If you are running HDMI firmware earlier than 1.66 you will have problems with the audio passthrough to an AV receiver that is HDMI 2.0 capable. After the update, which can be downloaded on the Intel Download Center, all audio formats should work fine.

I installed LibreELEC 8 Beta version on the NUC and to my surprise most of the things were working straight away, including the WiFi adapter. However, the HD audio passthrough did not seem to work for anything fancier than Dolby Digital or DTS on LE either. It seems this is a known problem with the Intel GPU drivers. I would expect it to be solved in the nearby future as well.

It’s worth noting that support for the 10-bit HEVC decoding on the Kaby Lake GPU is not part of the LibreELEC 8.0 code. Experimental builds do exist that handle the decoding in hardware.

Just like the NUC6CAYH that was released a month earlier, this NUC features improved HDMI-CEC support. HDMI CEC stands for HDMI Consumer Electronics Control and is an HDMI feature many TVs and peripherals have. This feature makes your devices work better together. For example, it can automatically turn off your TV when you turn off your HDMI CEC-enabled DVD player.

In the BIOS you have the possibility to configure the behaviour when it comes to the HDMI CEC. Personally I was happy to see my TV switching on and selecting the correct HDMI input automatically when I powered on the NUC.

Next to the memory slot there’s a HDMI CEC header on the mainboard. This can be used if you need more evolved HDMI CEC support. With the Pulse Eight HDMI-CEC adapter inside your NUC you can use just your TV’s remote to control the NUC – no need for an additional remote on the sofa table.

Compared to the previous generation Core i3 NUC (NUC6i3SYH) the most significant changes are:

The performance of the NUC, both in the benchmarks and in practical use, was rather good. It was responsive and felt fast enough for basic desktop work in Windows 10. There are no significant performance improvements when looking back at last year’s Skylake NUC however. I doubt many Skylake NUC owners will see enough reasons to upgrade. For the people who plan to build a HTPC out of the NUC it’s great to finally have full support for HEVC decoding, however I’m hesitant to recommend the Kaby Lake NUC before the audio passthrough is fully supported in Linux. Of course if you plan to use only Windows or don’t have an external amplifier or no more than 5 channels that might not be a show-stopper for you.

If you’re interested in one, our resident guru, the NUC Guru can assist you in choosing the parts that will work nicely together and give you a shopping list with exact items to buy. There are also some suggested setups below.

Recommended Setup for Most Users