Last but not least in the Kaby Lake NUC family, I will take a look at the i5 NUC. Arguably it could be the most interesting model in the Kaby Lake series. The previous generation i5 NUC had a good enough GPU to do some casual gaming, but the 15W CPU still did not make the fan spin up too much. The current generation i7 that I reviewed earlier performs well, but the fan was a bit too noisy for my taste. Read further to find out if the i5 NUC will be able to meet those expectations.

Please note that in this Kaby Lake i5 NUC review I’m using the NUC7i5BNK model, which does not have a slot for the 2.5″ drive. However, the unit is identical to the more popular NUC7i5BNH which has a little bit larger chassis in order to accommodate a 2.5″ SATA drive. Both units feature exactly the same mainboard and CPU, the only different is the chassis.

Ok, time to walk around and kick some tyres.

If you’ve already seen any of the other Kaby Lake NUCs there are no big surprises here. Heck, if you’ve seen any of the NUCs in the last couple of years there are no big surprises here. The piano black top cover is a scratch magnet, so keep the protective plastic film on until you’re done with the assembly. The power button is now on the front panel instead of the top. 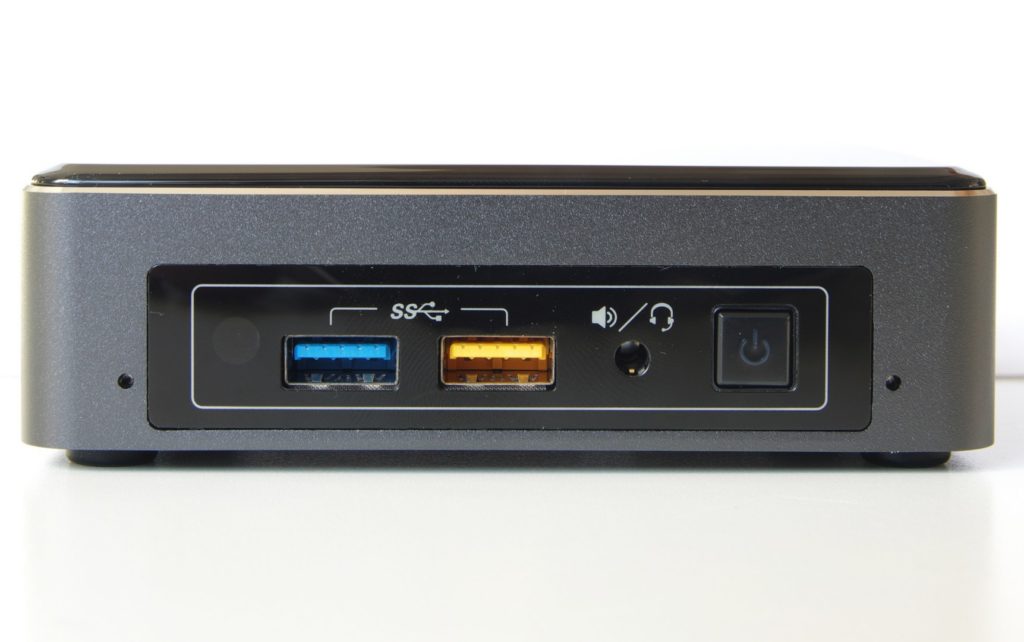 On the front panel you’ll find 2 USB 3.0 ports and the yellow one is fast charging capable. To the right from the USB ports you can find a line out/headphone connector and a power button. The two small holes are for the dual microphone array. There’s also a ring LED around the USB ports and power button that by default works as a HDD LED, but can be configured for other purposes (you can write software to turn the ring LED into a disco light). The infrared remote control receiver window is also on the front panel.

On the left hand side of the chassis you’ll find a micro SDXC card reader. I think that the old SD card reader in the previous models was more useful though. 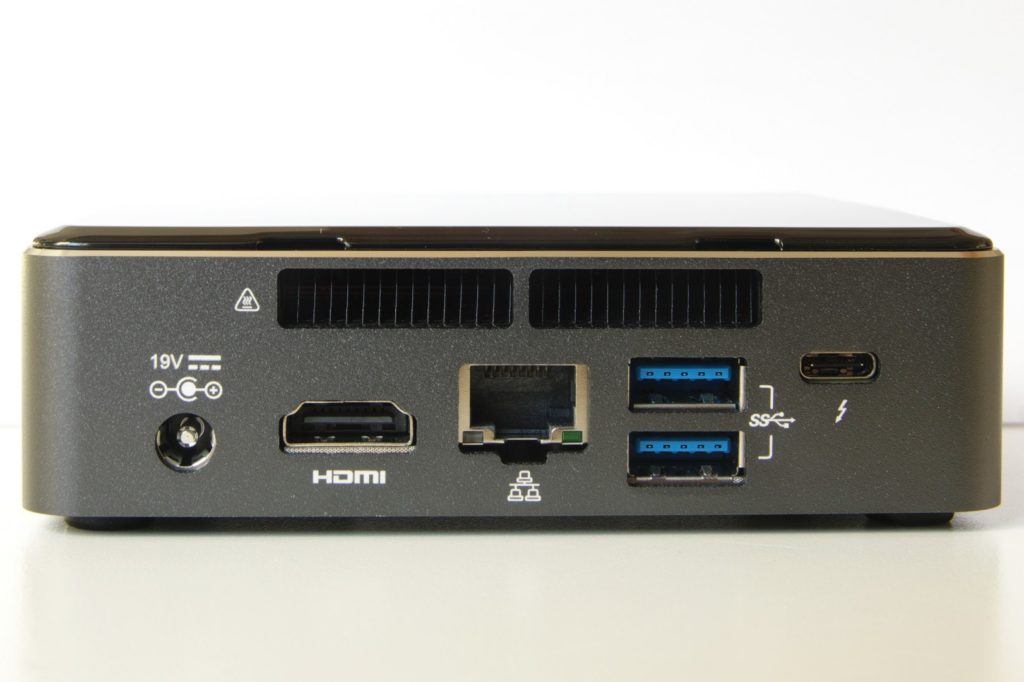 Turning the NUC around we’ll find the usual connector on the back. There are a DC connector, a full-size HDMI 2.0 connector, a Gigabit Ethernet connector, two USB 3.0 ports and the Thunderbolt port. The Thunderbolt port comes in the form of a USB Type-C connector and the port can function as a USB 3.1 port as well as a Thunderbolt 3 port, which could be used to connect an external GPU for example. The same port works even as a DisplayPort.

The Kaby Lake i5 NUC is delivered as a barebones kit. You will need to add memory and a storage to complete the unit. As the NUC7i5BNK model that I have here does not have a SATA slot, the choice are easy. Two DDR4-2133 SODIMM RAM modules and a single M.2 SSD drive is all that’s needed. You could use only a single RAM module but that would not enable the dual-channel mode which makes (especially) the GPU run a bit faster. If you’re not entirely sure what kind of components you should buy, have a look at our build-a-NUC tool – the NUC Guru. The guru can recommend you components that are known to work together.

I decided to use the exact same components I was using when reviewing the i7 model. Two 4GB HyperX DDR4 RAM modules and a Crucial MX300 275GB M.2 SSD. The SSD is a more traditional SATA disk that is capped at around 600 MB/s transfer rates, but the NUC does support also the faster NVMe SSD disks such as the Samsung 960 EVO which can reach up to 3 gigabytes per second read rates! 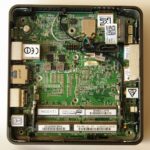 The installation itself is a piece of cake. You need 2 screwdrivers: a medium size to unfasten the four screws that hold the bottom cover in place and a smaller one to take care of the small screw that keeps the M.2 SSD disk in place. The memory modules just click on to their places without any tools or screws being involved.

The last photo shows you how it looks after the RAM and the SSD are in place. At the very bottom of the picture you can see there’s a header for HDMI-CEC functionality. The NUC itself has basic HDMI-CEC functionality to control the power of a TV/amplifier but this header can be used to extend the capabilities further.

When booting up the NUC we’re greeted by the familiar Intel Visual BIOS. Entering the BIOS setup gives us possibilities to tweak the hardware behaviour although you won’t find as many options here as some gaming mainboard might offer you.

Some changes compared to the previous generation are:

There is an existing flaw in the MegaChips MCDP2800 LSPCon firmware that is in the device. The same flaw was present in the Core i3 powered model. Version 1.66 is the first one that works as expected. Older HDMI firmware versions are not able to bitstream HD audio formats to an AV receiver correctly and they have issues with certain TV sets (especially some Samsung models).

A firmware upgrade tool can be downloaded from Intel. Note that it must be run in Windows and that a HDMI 2.0 device should be connected when doing the upgrade.