In the second part of our Gemini Lake NUC review we run some popular benchmarks on it to get an idea how does it perform compared to the other entry-level NUCs. If you came here via a search engine, I’d suggest you take a look at the first part of the review first. We’re going to run our standard setup which is 3DMark, Cinebench and Geekbench this time. 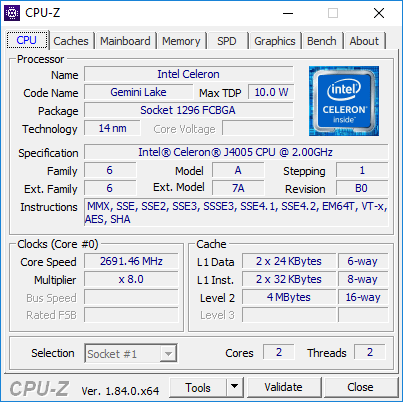 I installed a recent version of Windows 10 on the NUC. During the installation the WiFi adapter was not detected so I had to use the wired Ethernet connection for downloading the updates and drivers from Intel’s Download Center. I had hard time installing the display drivers as the installation of the driver version 4944 always complained about my system not meeting the minimum requirements. In the end I installed the older 4905 version successfully. It was then possible to update the driver via Device Manager by browsing (Have disk) to the path where I had extracted the 4944 version.

Cinebench runs 3 separate benchmarks and gives figures that are comparable between systems. First a simple 3D car chase that measures mainly the GPU (OpenGL) performance. The result is in frames per second. After that there’s a rendering of 3D model with all cores. This stresses purely the CPU. Finally there’s another rendering of the same model, this time using just a single CPU core. 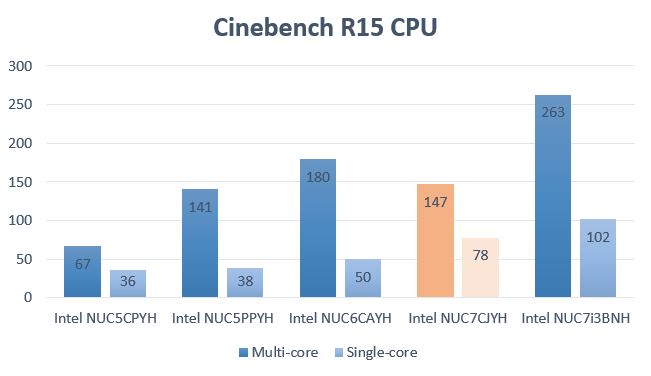 In the multi-core CPU tests the NUC7CJYH actually falls behind the previous generation NUC6CAYH. To be fair, the J3455 CPU in NUC6CAYH is a quad-core CPU where as the J4005 in this NUC is merely a dual-core. The single core performance is significantly better though. Remember that there was only one entry level NUC in the previous generation and that was the quad-core NUC6CAYH. This year there are dual-core and quad-core options available. 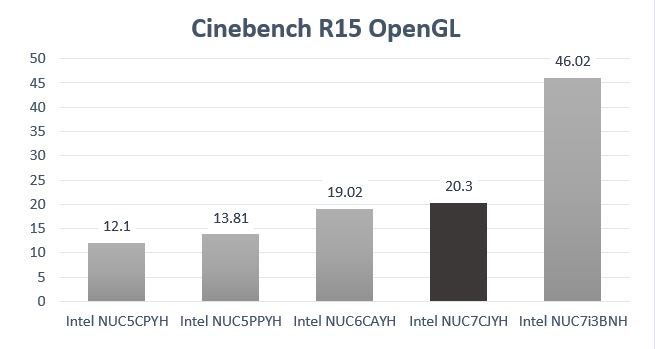 In the OpenGL test the NUC7CJYH manages to pull just barely ahead of the NUC6CAYH despite the slower CPU. I would assume this is due to the more powerful GPU.

3DMark is a popular benchmarking suite that benchmarks video and gaming performance of the computer. 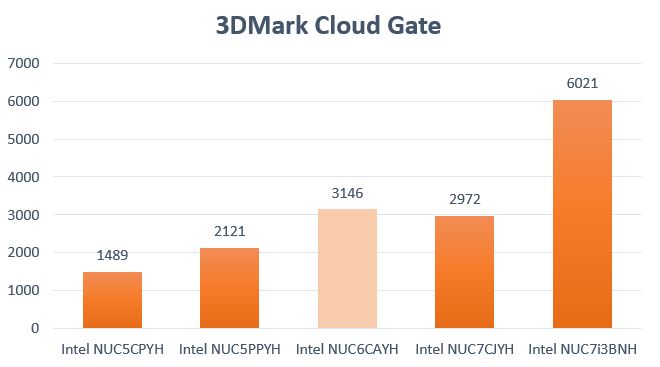 In the 3DMark Cloud Gate test the NUC7CJYH is slightly slower than the previous generation NUC. 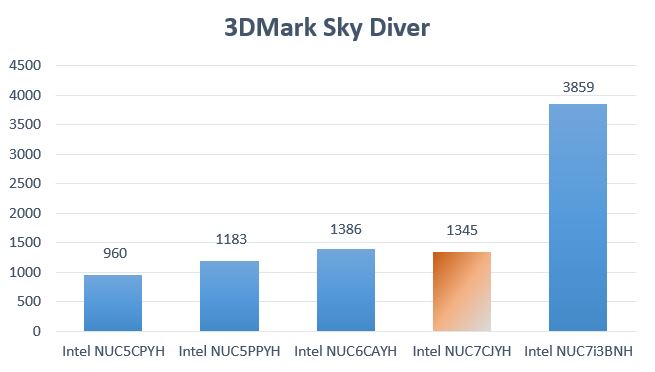 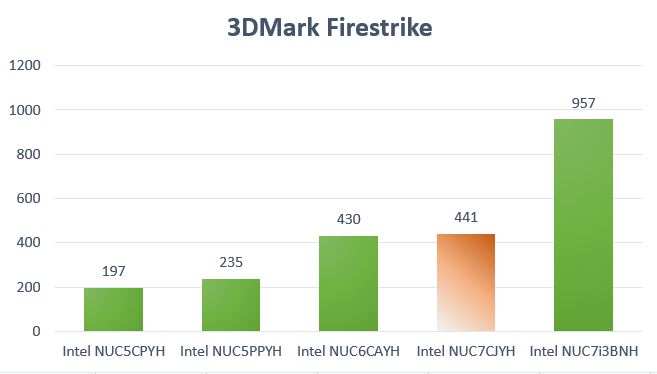 And finally in Fire Strike the new NUC pulls slightly ahead.

In the Passmark CPU test I got result of 1653. This is significantly lower than the NUC6CAYH score (2285).

The default BIOS settings kept the fan running at very low levels even during the CPU intensive benchmarks. There’s also an option to completely turn off the fan when the temperatures are below a certain limit. This is enabled by default as well. I’d say that the box was almost totally silent.

Thoughts of the Performance

The performance of this Celeron-powered Gemini Lake NUC is a bit below the previous generation NUC6CAYH in most tests. This is mainly due to Intel’s product positioning strategy. NUC6CAYH has a more powerful quad-core CPU, whereas this year the lower end NUC comes in two variants: this one and the more powerful quad-core NUC7PJYH. In any case, the price point of this NUC is the same as it was for NUC6CAYH, so in that sense the results are quite disappointing.

Be sure to read also the earlier parts of this review!