Often when you get brand new hardware there is something that doesn’t fully work under Linux. Sometimes the GPU isn’t supported and you cannot get a graphical desktop open and sometimes it’s something small that doesn’t work such as the Wi-Fi adapter. This is why it’s a good idea to select the most recent version of your favorite distribution.

I downloaded the version 19.10 of Ubuntu Linux and quickly installed it on the NUC. To my great surprise everything seemed to work straight away. I was expecting issues with Wi-Fi since the NUC has the brand new Intel AX 200 Wi-Fi adapter with 802.11ax support. However, it seems even that was supported since kernel 5.1 and the Ubuntu has kernel version 5.3. Here’s my full boot log if you’re interested.

There’s not much to say about the media playing performance in Windows 10. For the last couple of years any NUC has been able to decode HEVC video at 4k resolutions effortlessly. That is the case this time as well. HDR output to my TV was fine as well.

It wasn’t exactly smooth sailing to get LibreELEC running on the NUC10i7FNK. My first attempt with the latest stable version (9.2) resulted in a black screen staring at me with the infamous Failed to start xorg. Is your GPU supported? error. Well, apparently not. Things got a bit better when trying out a recent nightly development build. At least it would work, I mean. However, hardware decoding using VA-API was not working which meant that all videos were decoded by the CPU. Of course this 6-core i7 effortlessly managed to decode even 4k resolution HEVC coded video. 4k HEVC (Sony Swordsmith demo clip) is quite a bit for the CPU to chew so the loads were up to 60%. This of course meant that the CPU fan boost up annoyingly.

Now I’m sure that things will improve soon but at this moment running a LibreELEC-based HTPC is not something I’d do on the Frost Canyon NUC.

EDIT: With the nightly build VA-API can be enabled by running the following command in the shell:

The Comet Lake i7 NUC failed to impress initially. There’s not much improvement compared to last year’s Coffee Lake i7 NUC. Basically it is very much the same product with a yet another iteration of Intel’s 14 nm CPU. In addition, Intel decided to drop the Iris Plus GPU from this NUC and replace it with much weaker UHD Graphics 620 GPU. No doubt this is done intentionally to differentiate the Frost Canyon NUC and the upcoming gaming-oriented Phantom Canyon NUC that will feature a discrete GPU.

However, I liked the good CPU performance and the fact that the i7 model this time has a hexa-core CPU. I’m sure many home lab enthusiasts will welcome the addition of 2 more cores. Furthermore, this year the i7 option seems worthy as it gives you extra 2 cores over the i5. Previously the i7 has often been more or less the same as i5 offering with some increased CPU frequency (and thus heat and noise). This is the fastest CPU currently available in a 4×4 NUC form factor I believe.

When it comes to the performance in GPU-demanding applications I’m not so impressed. A decrease of 40% in the 3DMark Fire Strike benchmark or a decrease of 37% in Dirt 3 FPS is not something you’d like to see when comparing to the corresponding previous generation NUC. Some have pointed out that the previous NUCs didn’t have a capable GPU anyway (even if clearly better than UHD Graphics 620) so why waste any effort on that.

As said before, I’m sure this was partly done because of product positioning. The NUC10i7FNH/K is a pretty powerful small computer provided that your usage does not include gaming or other GPU intensive tasks. I think the message is clear: Frost Canyon for typical office tasks, content creation, mini servers etc. and Ghost Canyon or upcoming Phantom Canyon for gaming.

All in all, I don’t think it’s a bad product. There are small improvements here and there. You’ve got Type-C port in the front panel now (wish there was power delivery on those ports, but no) and the Wi-Fi adapter supports 802.11ax a.k.a. Wi-Fi 6. The 6-core CPU is faster than anything on a NUC before this. It’s not ridiculously noisy either and the fan behaviour can be adjusted in the BIOS rather extensively. Shame about the GPU really but if you’re not looking forward to playing games or doing other GPU intensive tasks on the thing it could be just the ticket.

Thank you for reading and let me know what do you think in the comments section below! 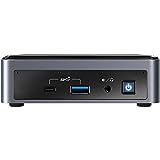