Even if the i3 model doesn’t quite give you the same performance as the i5 and i7 models do it’s interesting to see how does it compare in the benchmarks to the previous generation NUCs as well as the faster Frost Canyon models.

All tests were done using the BIOS version 0039.

CPU-Z incorrectly reports the codename as Kaby Lake-U/Y, whereas HWiNFO is correct:

Compared to Bean Canyon NUCs the performance is rather depressing in the Sky Diver test. You can really see how big of an impact the omission of the Iris Plus GPU has made.

Cinebench R15 is another benchmark tool for the GPU and CPU performance. There’s also Cinebench R20 that I’m already using to collect results, but as I don’t have comparative data yet for the previous generation, I’ve left it out from this review.

The OpenGL test is a GPU test so the results don’t look too good for Frost Canyon here.

Whereas the CPU test is not impacted by the lesser GPU, so the results are relatively ok. But still, only on par with the previous generation i3 model.

Geekbench is a cross-platform processor benchmark, with a scoring system that separates single-core and multi-core performance, and workloads that simulate real-world scenarios. Good thing about Geekbench is that it’s available for a lot of different platforms including iOS and Android so it’s easy to compare performance widely.

In the Geekbench 3 test the Frost Canyon i3 does slightly better than the Bean Canyon i3.

As always, I ran the Dirt 3 benchmark sequence to get an idea if the benchmark results are reflected also to real-world gaming.

As seen from the results above, they indeed are. Bean Canyon beats Frost Canyon in Dirt 3 hands down.

The power consumption figures I’ve taken with a consumer grade powermeter so they’re not exact science. However, it appears from the numbers that the Frost Canyon is pretty frugal when it comes to power consumption as I did not manage to see numbers much over 40 watts.

The Frost Canyon NUC utilizes the same large fan that was used in Bean Canyon, which is good news since I found it relatively quiet compared to the older and smaller fan solution used previously. As expected the NUC is relatively quiet although the fan does spin up when the CPU is being stressed. It’s not silent, but relatively quiet. Comparable to many laptops I would say. The fan behaviour can be configured in the BIOS options either by selecting from a few preconfigured presets (such as quiet, balanced, cool) or by tweaking the individual fan speed and temperature parameters.

Should I build a HTPC based on this?

This question was asked me by a reader. The UHD Graphics 620 GPU is able to hardware decode pretty much any modern video format, so in that sense it should be just fine. The previous generation NUC (Bean Canyon i3, NUC8i3BEH) would make an equally good HTPC though as the GPU is able to decode all the same video formats and it’s much more powerful. That extra power will not matter in HTPC use, but maybe you will decide to do something else with your NUC later. Then again, the Frost Canyon is a bit more power-efficient than the Bean Canyon – even if both have rather low power consumption.

If you’re planning to build your HTPC based on the popular LibreELEC platform just be aware that the current stable version (9.2.2) does not support the GPU in the Frost Canyon yet and will fail to start. There are already development builds that do work fine so expect to see the support land into a stable release soon.

I’ve been using the NUC10i3FNK for normal desktop use for the last two weeks and for that use it is completely adequate. Windows 10 runs fine and I can fluently browse web with many tabs, do text editing, watch videos, etc.

However, comparing this NUC to the Bean Canyon i3 NUC is a bit frustrating. Significantly weaker GPU and more or less an equal CPU. I think I don’t remember ever seeing such a small increase in performance (or a step backwards as we see in the GPU related benchmarks) as seen when comparing the Bean Canyon and Frost Canyon i3 NUCs. Yes, it does support 64 gigs of RAM and has an improved Wi-Fi adapter but those changes will not manage to tip the scale for me. The possibility to equip it with 64 gigabytes of RAM might make it interesting as a micro server, but then again, if you’re building a micro server you probably want the quad-core CPU of the i5 model or the hexa-core of the i7 model. All in all, it’s quite hard to justify purchasing the NUC10i3FNK over NUC8i3BEH.

A lot of the things we like about the Intel NUC product are still there: the build quality is solid, the unit is tiny in size, the fan is not too noisy and its behaviour can be customized and it features latest Intel CPUs. It’s just that there’s not much we didn’t already see and have in the unit that has been on the market since last year.

That’s it for the NUC10i3FNK review. If you think I missed something important or if you want to tell your feelings about the NUC10 please use the comments box below. 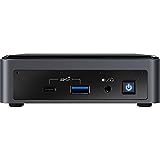