Akasa is a well-known manufacturer of fanless cases for Intel NUC computers. They’ve been producing cases for various NUCs for a good amount of years though they’re probably more known for their cooling solutions. Today I’m writing you about the Turing FX which is the latest fanless case they’ve produced for the Intel Frost Canyon NUC. The case was kindly given me for the review by Akasa – thank you!

Turing itself is not a completely new product, as there is a very similar case for the earlier Bean Canyon NUC called simply Akasa Turing. Turing FX is the new case that can take the Frost Canyon mainboard.

The Akasa Turing FX looks bigger in the pictures than it actually is. When you pick it up from the box it seems much smaller than I imagined based on the pictures I had seen before. However, as soon as you take it out of the box you realize it’s one hefty chunk of aluminum! The case weights almost 2.5 kg (5.5 lbs) which I reckon is just a good thing as the case is basically one large heat sink.

There’s actually quite a bit of assembly to be done. I’m installing my NUC10i5FNK mainboard into the Akasa case here. You probably need to start by removing the mainboard from your original NUC case. In case of Frost Canyon it’s actually not too difficult. There are two screws that hold the mainboard in place. In addition you need to disconnect the WiFi antennas carefully. I mean carefully – the connectors will break easily. Disconnect the cable for the main panel LEDs and switches as well as cable for the microphone array. If you want to use the microphone array you’ll need to detach that from the case as well. It’s held with two screws and then you can just slide it out. I actually didn’t bother as I don’t use the microphone for anything.

You should end up with a loose mainboard now. 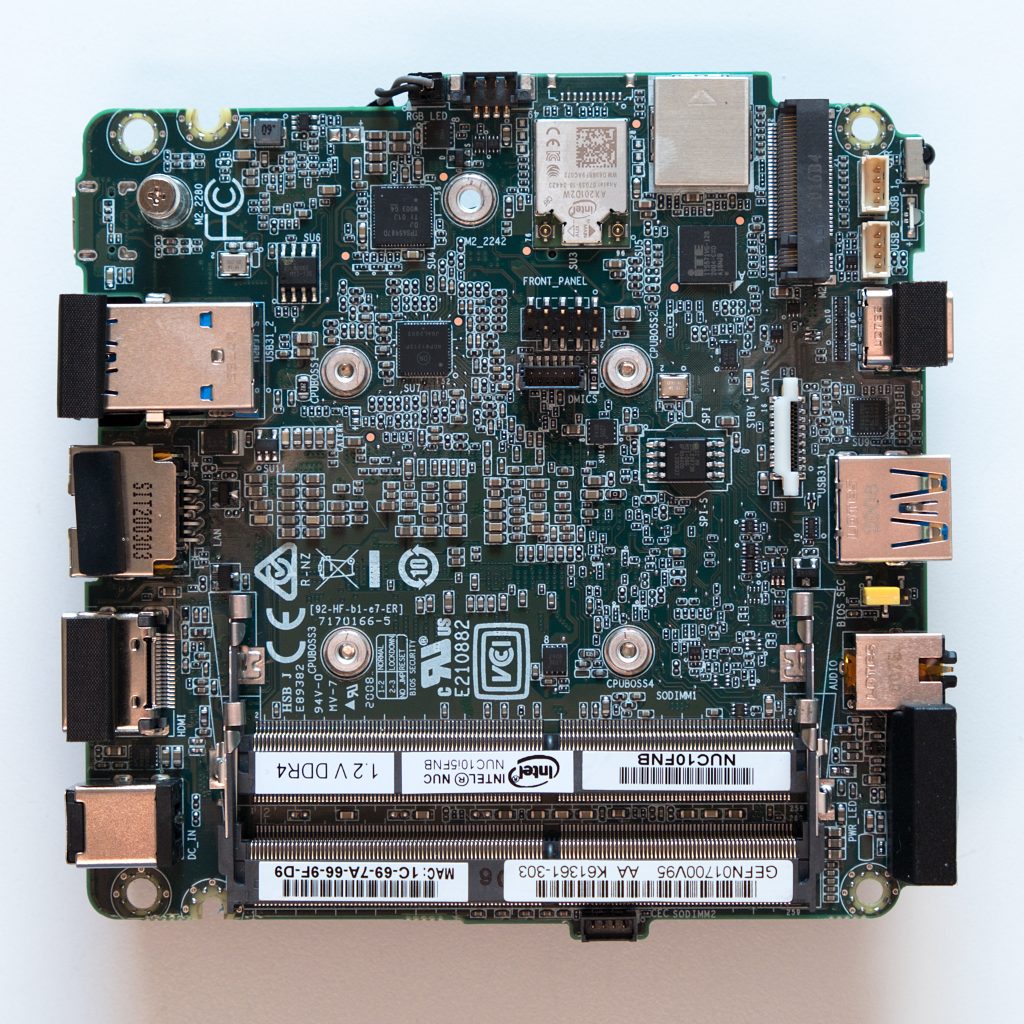 However, you need to remove the cooling solution from the other side of the main board still. Unfasten just a few screws and you’ve got your CPU naked. 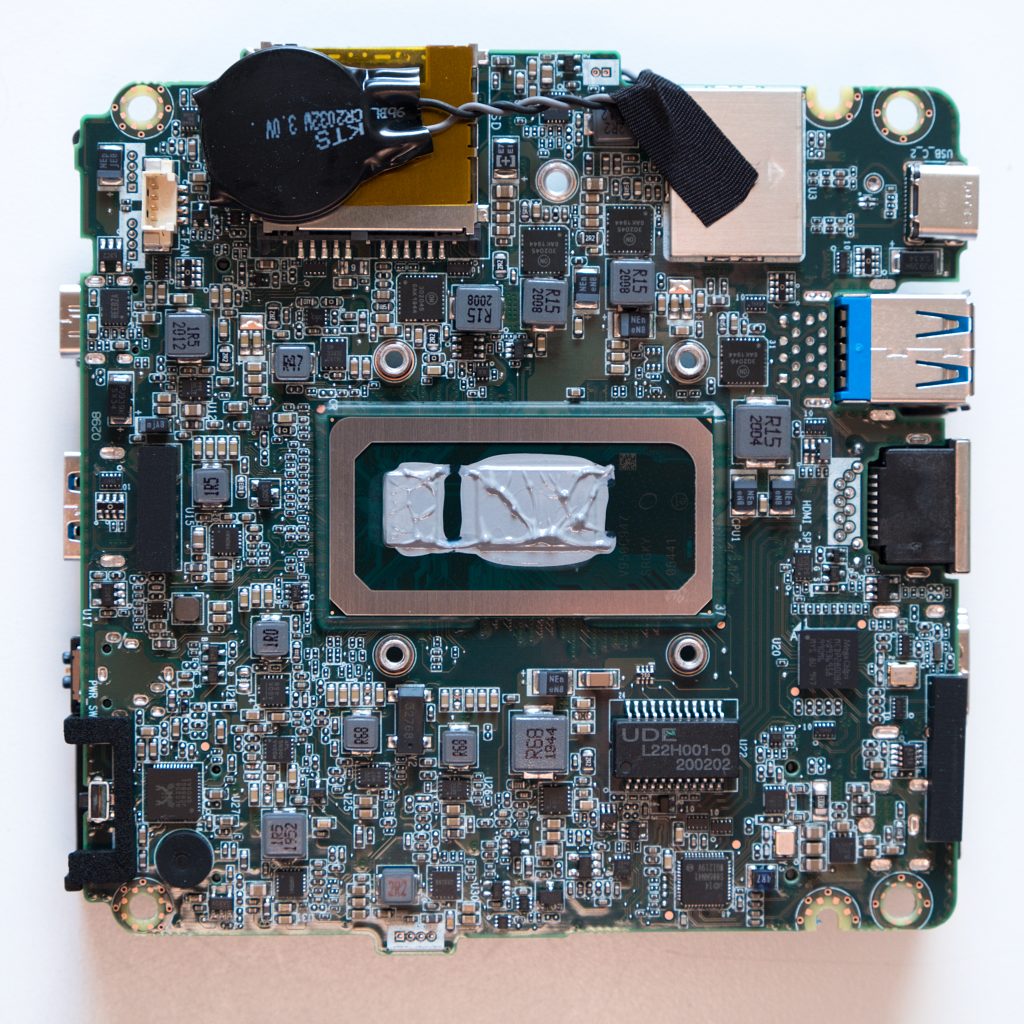 Then it’s time to use some cleaning alcohol to remove the old thermal paste. There we go, ready to be installed into the Turing FX case.

The case is packed well and is surprisingly heavy. “Heavy is good, heavy is reliable.” 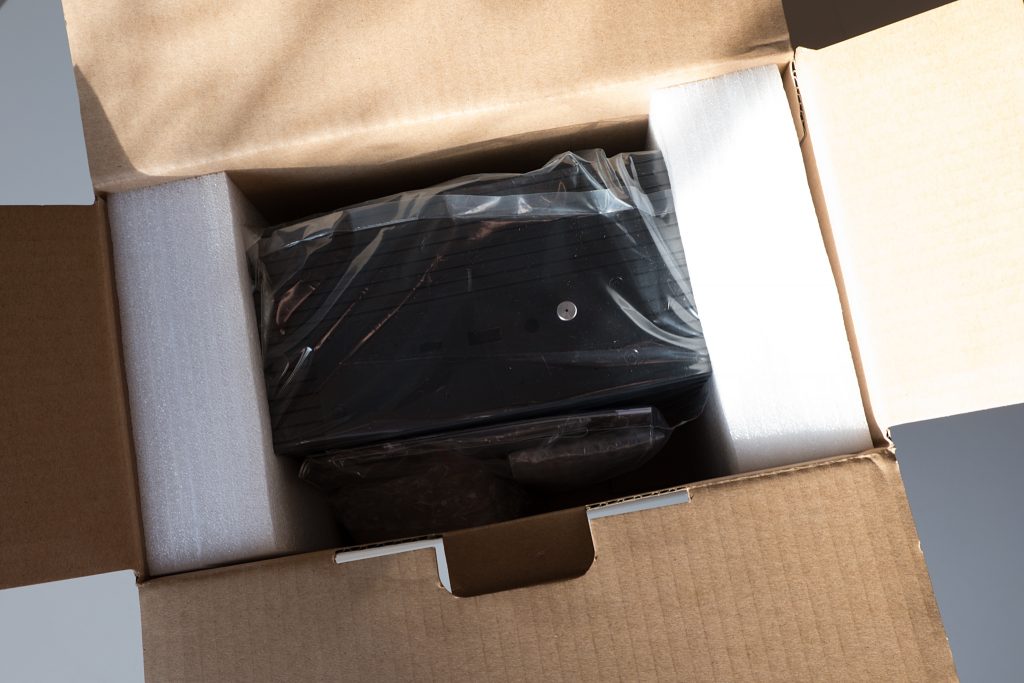 There’s a good collection of screws, parts and even some thermal paste. The supplied instructions are clear and the installation is pretty straight forward.

Here’s the empty case. The mainboard will be fastened on the 4 standoffs and the CPU will touch that clear piece of aluminum. Of course you should add some thermal paste in between. Akasa provides a small amount of thermal paste with the case. I actually compared the thermal performance between Arctic MX-4 thermal compound and the Akasa thermal paste but found no significant difference.

The mainboard is fastened with 4 screws. Don’t forget the washers. Worth noting that the case does not provide you a way to access the SD card slot of the NUC so you’ll basically lose that functionality of the NUC. Not a big deal for me but good to understand anyhow. 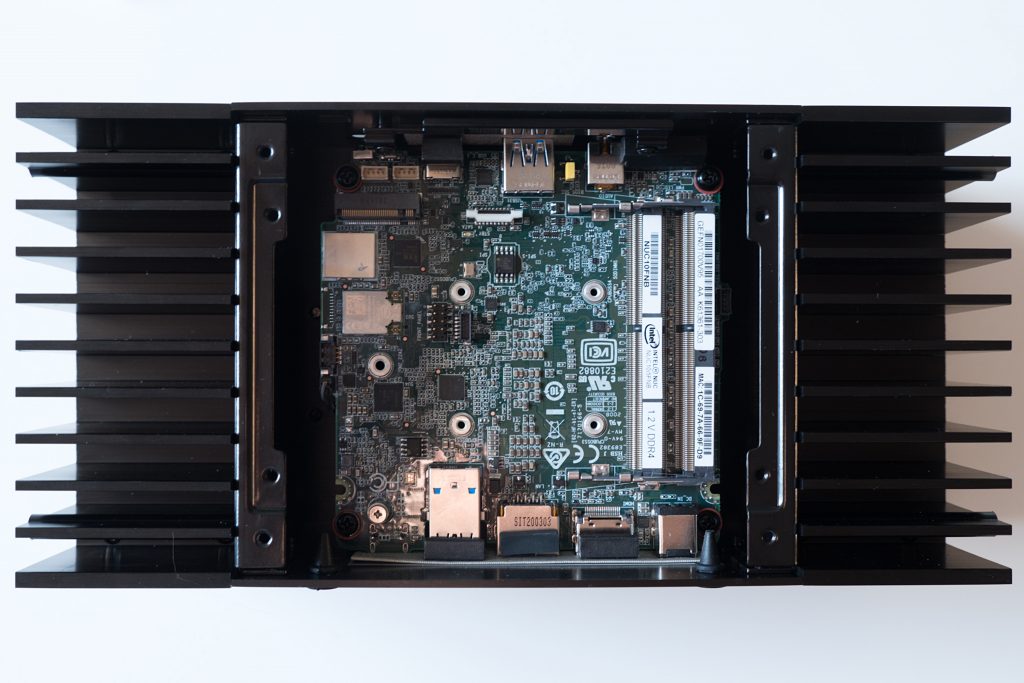 Apply some thermal paste and attach the SSD drive heat distributor. Of course if you use only a SATA drive this is unnecessary. 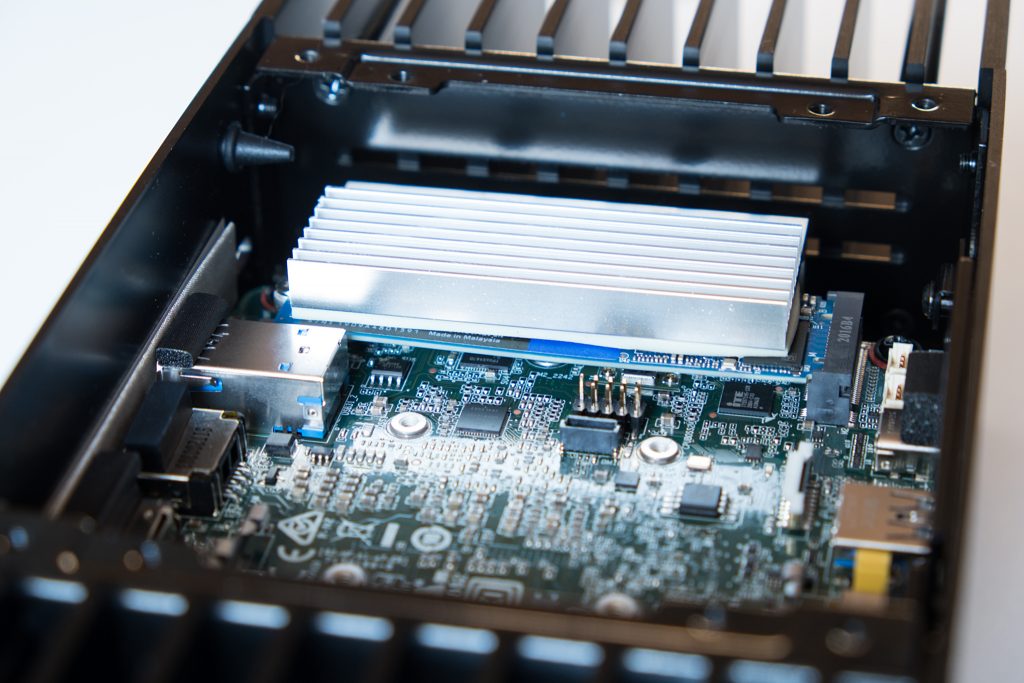 You’d need to install the WiFi antennas still if you bought them separately. Akasa has a products for this (the pigtail cable and the antenna) or you can source them from eBay/Amazon easily. Also, if you plan to use the microphone array or a 2.5″ SATA drive now is the time to install those into this case. I had plan to do neither. 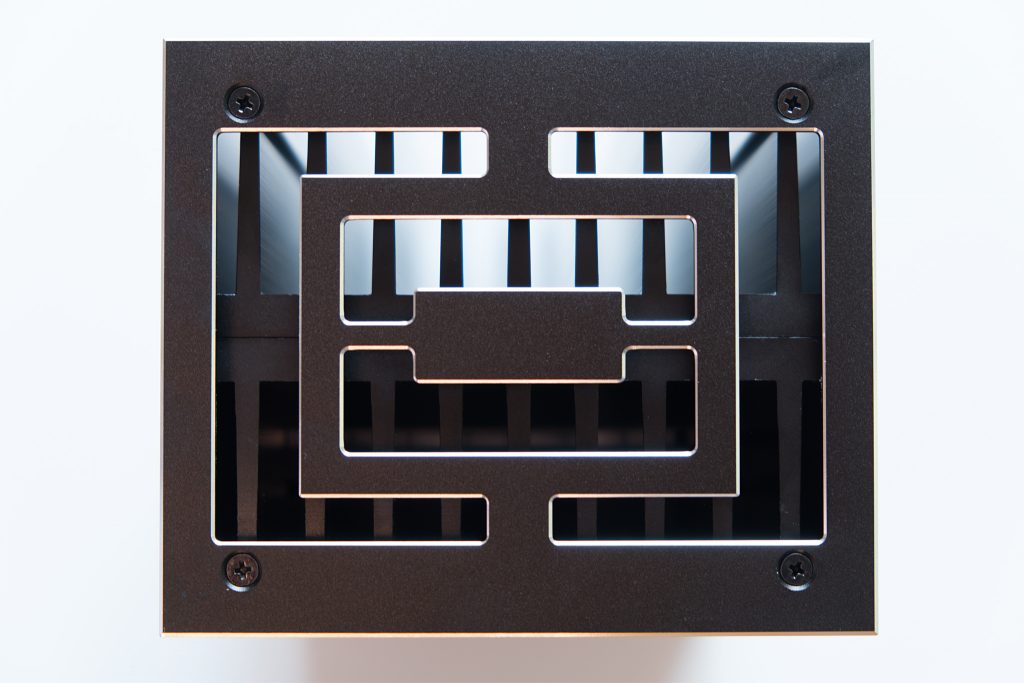 And it’s done! It is a bit of a shame that the NUC mainboard component placement changes a bit on every version so if you’d like to keep using a fanless case for the next NUC you buy you will need to buy another one. Also, for Akasa it’s probably slightly bothersome that they need to design a new case for every generation of NUCs.

Switching on the NUC gave me an eerie feeling: something was missing. And indeed – the fan noise was missing!

Under normal operation (think browsing, Photoshop, watching videos, etc.) the temperatures stay in the 30-40 degree Celsius range. The case feels lukewarm to touch. Having a completely silent PC is amazing.

This is where things get interesting. Is the Akasa Turing FX able to keep the CPU cool enough and the system running stable if the CPU is stressed for longer periods? I made several tests under full CPU load. I used the “Stress CPU” option in CPU-Z utility and at the same time recorded the performance metrics using Intel Extreme Tuning utility. In the Intel Extreme Tuning utility it is possible to configure the turbo boost power and length as well as the sustained TDP limit for the CPU. By default the turbo boost is set to 64 watts whereas the sustained TDP is set to 30 watts. This means that for a limited amount of time the CPU will be able to run about as fast as it can (it seems the i5-10210U won’t go over 35 watts though) and then the power limit throttling will kick in and the TDP is limited to 30 watts. 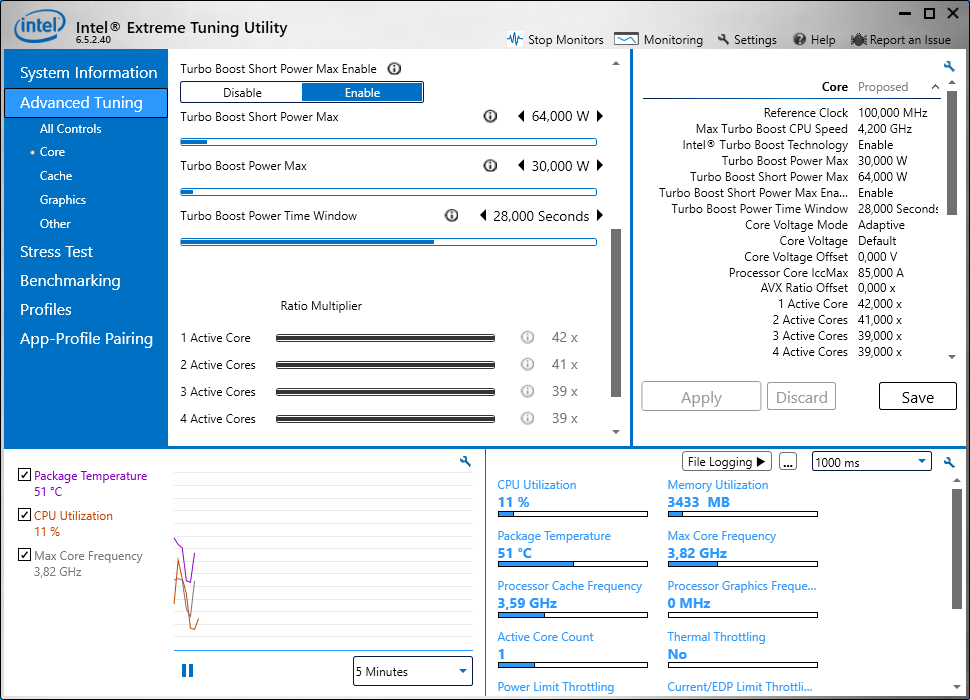 Let’s start by looking at the stock case of the NUC10i5FNK with default BIOS settings.

We can see that as soon as we start the stress test the turbo boost kicks in and pushes the CPU core frequency to about 3.8 GHz. This lasts for about 45 seconds and during this time the CPU temperature quickly rises up to 90 degrees Celsius. The fan starts to spin in an audible way. After the turbo boost period is over the power limit throttling limits the TDP to 30 watts and the core frequency drops to 3.6 GHz. CPU temperature settles at around 86 degrees Celsius and the fan keeps spinning fast. We have to keep in mind that even if the CPU temperature is at 86 degrees, other components of the system are kept cooler by the airflow provided by the fan.

Next let’s look at the Akasa Turing FX case with default BIOS settings.

We see the turbo boost period at the beginning of the test. The large mass of the Turing FX case keeps the CPU much cooler during the turbo boost phase and the temperature remains well below 80 degrees Celsius. After the turbo boost period the CPU is throttled back to 30 watts and the CPU temperature starts to climb slowly staying below 80 degrees at all times. The Akasa case manages to keep the CPU clearly cooler than the stock case. However, at around 14 minutes into the test something happens and the CPU frequency starts to vary wildly between 1.3 and 3.8 GHz. Looking at the raw data it seems that at that point the Motherboard VR Thermal Throttling kicks in and throttles the system. At the same time the power limit throttling is released, so when the VR thermal throttling is finished, the system can again run at turbo boost frequency (3.8 GHz) which causes the VR thermal throttling to kick in again and the system ends up oscillating between turbo boost and mainboard VR thermal throttling. The TDP and CPU core frequency are all over the place as can be seen from the graph.

You could probably have a small fan cooling the case, but then again, what’s the point of a fanless case if you need a fan for it.

Next I proceeded in lowering the sustained package power limit (TDP) and trying to find a setting that works even if the NUC is stressed continuously. I started at 28 watts but found out that 25 watts was the setting that seemed to be good enough. While trying to find out a good setting I even managed to get the NUC automatically shut down. When booting up again I was faced with the following screen.

The power limit set to 25 watts meant that the case didn’t become so hot that thermal throttling would have been applied.

Running the CPU-Z stress test for an hour resulted in CPU temperature of approximately 76 degrees Celsius. The CPU max frequency was limited to around 3.4 GHz after the turbo boost period. The case felt quite warm but not burning hot to touch.

The Akasa Turing FX is an impressive case. It is bigger than the original NUC case but still small. It looks great to my eyes and the build quality and machining are top notch. Using a completely silent PC yet relatively powerful PC is a luxury that I wish I could experience more often. Due to complete lack of noise the case would make a perfect HTPC (I actually have my Gemini Lake NUC HTPC in a fanless Akasa case) or a music streaming server. If you’re using your NUC as your desktop PC and annoyed by the fan noise the Turing FX would be your best option of making it completely silent.

If you plan to use your computer fully loaded for longer periods of time you will need to think a little bit about your build. Some SSD drives are specified only for up to 70 degrees Celsius working temperatures and the case does get rather hot. Some mechanical hard drives go only up to 45 degrees C. You might want to limit the TDP of your NUC to a lower figure than the default of 30 watts. I found out that the system was stable under full load at 25 watts.

All in all, I think the Turing FX is the best fanless NUC case I’ve seen. If it would be able to keep the system stable at the default TDP it would be perfect. Fanless computing often involves compromises and this is clearly one we see here. 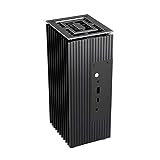