Let’s start by talking fan noise. The fan management in this NUC is fantastic. It’s very close to being silent when you’re not stressing the CPU and the GPU and even under heavier loads it doesn’t get annoyingly loud. I guess a lot of this is due to the larger diameter fans but it is apparent that Intel spent some time optimizing the acoustics of this NUC.

This probably isn’t the NUC you’re thinking of if you’re concerned about the power consumption. I recorded 17-20 watts at idle Windows desktop and during high stress there were peaks up to 225 watts where the consumption usually hovered around 100 watt mark. The power brick does get quite warm under heavy stress.

I often get asked whether a certain Linux distribution works on a particular NUC. While I cannot test everything, I’d say the chances are fairly good if you use a recent version of your distro and it contains a fresh kernel. There used to be times when you had to tinker for a week to get a Linux Desktop up and running at least somewhat decently. However, it wasn’t that smooth sailing with the Phantom Canyon. I installed Ubuntu Linux 21.10 on it which initially seemed to work just fine. However, it soon became apparent that the GPU driver was crashing every now and then as can be seen in this dmesg printout. Likely something that will be fixed in the coming GPU driver versions though.

I did execute the Basemark GPU test for Linux and the Phantom Canyon was able to score 4978 points.

It’s a shame that the availability of the Phantom Canyon has been so shaky. However, it seems it’s finally starting to properly hit the shelves globally. It’s a very well-built NUC that seems very refined. At the same time the performance is unlike anything seen in such a small box before. A mere standard RTX 2060 GPU is approximately the same size as this NUC. Yet the fan noise is still kept at bay.

What do you think about this NUC? Let everyone know below in the comments section. Or if you know where to source one let others know too!

Check out the total price of the whole setup on Amazon.com!

And don’t forget to check out our Build Your Own NUC tool and create a custom system that suits your needs! 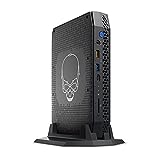